When the famous "Hollywood" sign fell into disrepair in 1978, various entertainers agreed to buy a letter for $27,777.77. Gene bought the first "L."

Gene Autry's association with Christmas and with the Hollywood Christmas Parade is widely known. Johnny Grant, Honorary Mayor of Hollywood, commented on this in the liner notes of the 1997 Varese Sarabande Records CD release Here Comes Santa Claus.

Gene Autry was Santa Claus 365 days a year. During the Yuletide Season, he became "Super Santa." He was a very generous and giving man.

Musically, the holiday season was Gene's franchise. Wherever in the world the USO sent me during Christmas, I heard Gene Autry's voice on Armed Forces Radio singing "Rudolph, the Red-Nosed Reindeer," "Here Comes Santa Claus," "Buon Natale" and so many others. To his fans worldwide, Gene Autry personified the spirit of Christmas.

Gene Autry was responsible for keeping one of the world's greatest Christmas traditions alive. When I informed Gene that the Hollywood Christmas Parade was suffering bad times and needed some assistance, financially and in the production area, he said, "Tiger, do whatever it takes." He never asked or knew how much of his money we spent to bring that parade back to a class-A holiday event.

Drawing approximately one million spectators along the parade route each year, it continues to be Hollywood's biggest single-day event and is the kick off for Hollywood's holiday season.

My job of producing the Hollywood Christmas Parade was always much easier when Gene Autry's schedule permitted him to commit to riding in the parade months ahead of the event, as other celebrities were always anxious to be in his presence and enjoy his company and wonderful holiday spirit. 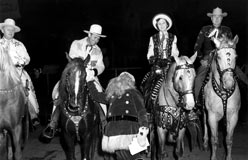 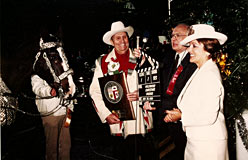 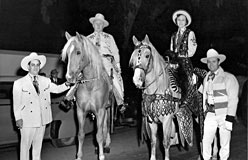 Gene Autry, far right, and other prepare for the Santa Claus Lane Parade in 1946. 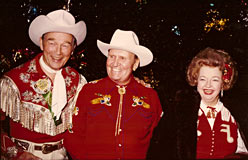