Clayton Moore
Close up from The Cowboy and the Indians publicity photo 1949.
Courtesy Gene Autry Entertainment 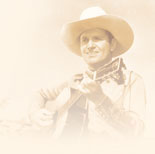 The Range Rider (1951) produced by Flying A Productions Inc.

Autry Museum of the American West

Naturally athletic, he practiced gymnastics during family summer vacations in Canada, eventually joining trapeze act The Flying Behrs at 19. The troupe performed during the 1934 Chicago World's Fair with young, strong Jack as catcher. Playing off his good looks, he was signed by the John Robert Powers modeling agency and enjoyed a print career in New York for several years. But a friend urged him to make the move to Hollywood in 1938 where he entered films as a bit player and stuntman.

In 1940, at the suggestion of his agent Eddie Small, he changed his first name from the commonplace Jack to the more distinctive Clayton. Beginning in 1942 with "The Perils of Nyoka," he eventually became King of the Serials at Republic Studios appearing in more cliffhangers than star Buster Crabbe. During this period, he also worked in many B westerns earning his acting – and riding - chops along side Roy Rogers, Gene Autry and interestingly Jay Silverheels.

Later in 1942 he entered the military, was stationed in Kingman, Arizona and assigned entertainment duties including the production of training films. From a payphone, he asked his future wife model Sally Allen to marry him; she said "yes" and joined him in Kingman for the balance of his enlistment.

After the war, Moore returned to these supporting roles while concentrating on westerns.

But it was his turn as "The Ghost of Zorro" with the black mask and piercing blue eyes that brought him to the attention of radio's hugely successful Lone Ranger producer George Trendle who was casting the lead role for the new television series. After the interview, Trendle said, "Mr. Moore would you like the role of the Lone Ranger?" Moore replied, "Mr. Trendle, I AM The Lone Ranger."

The series premiered on ABC September 15, 1949 and was the first western specifically written for the new medium. Although Moore's voice was a natural baritone, Trendle insisted he sound more like the radio actor Brace Beemer, so Moore worked diligently to mimic Beemer’s speech pattern and tone. Eventually developing a unique style recognizable in or out of costume. He starred in television's The Lone Ranger from 1949-1952 and 1953-1957 for a total of 169 episodes as well as two feature films in 1956 and 1958.

Moore was often quoted saying, “Playing the Lone Ranger has made me a better person” and continued to make commercials and personal appearances as the legendary western hero for the next three decades. But not without a sense of humor. The commercials for Jeno's Pizza Rolls, Aqua Velva and Dodge all wink at the overlap between the man and the character.

An important part of Moore’s personae belongs to The Lone Ranger Creed, which begins “I believe to have a friend, a man must be one.” Moore embraced its tenants in his personal life making sure to uphold the dignity of the character in public. His dedication was soon to pay off.

In 1979 the Wrather Corp., which owned the series and the rights to the title character, obtained a court order to stop Moore from appearing in public as "The Lone Ranger.” A new feature film was in the works and they weren’t interested in what they perceived to be an aging actor distracting their new audience. It proved to be a costly miscalculation. The public outcry was fierce and Moore’s fans made their point at the box office. After Jack Wrather’s death in 1984, his widow actress Bonita Granville dismissed the lawsuit restoring Moore’s connection to the mask. The David-and-Goliath battle, the fans’ reaction and the way Moore conducted himself throughout, unintentionally succeeded in elevating him to American Folk hero status.

What is Clayton Moore's legacy? It’s told in each fan letter from policemen, firemen and teachers who credit their choice of careers in public service to his portrayal of the western hero. His contribution to the entertainment industry and western film genre has been acknowledged with hundreds of honors including two Golden Boot Awards, a United States Postal Stamp, induction in the National Cowboy Hall of Fame, stars in the Western Walk of Stars, the Texas Trail of Fame and his is the only star in Hollywood’s Walk of Fame denoting both the actor and his character.

But perhaps the tale of Clayton Moore’s contribution to Americana is best told through the country’s most prestigious institution. The Lone Ranger mask – a symbol of justice and fair play – is today considered one of most important pieces in the collection in the American History Museum of the Smithsonian.