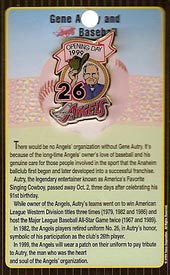 "There would be no Angels' organization without Gene Autry. It's because of the long-time Angels' owner's love of baseball and his genuine care for those people involved in the sport that the Anaheim ballclub first began and later developed into a successful franchise. Autry, the legendary entertainer known as America's Favorite Singing Cowboy, passed away October 2, 1999, three days after celebrating his 91st birthday.

"In 1999, the Angels wore a patch on their uniform to pay tribute to Autry, the man who was the heart and soul of the Angels' organization."

Back to ...And More Index