In 1940, and probably for several years before and after, the Gene Autry cap pistol was the main industry in Kenton, Ohio, a town of then 7,000. 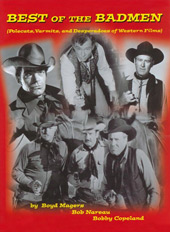 Best of the Badmen (Polecats, Varmints, and Desperados of Western Films)

The measure of how “good” the hero is in a Western film is usually based on how “bad” the villain is. Over the many decades of Western adventures there have been some wonderfully despicable bad guys and you can read all about them in the new book Best of the Badmen (Polecats, Varmints, and Desperadoes of Western Films). Extensively researched, the book features complete bios and photos on 315 Western screen heavies from 1930 to the TV era of the 1960s. The authors have also dug up facts and obscure information on the actors that have never been published before. Learn about their real lives as you prepare to boo and hiss them once again!

This book is out of print and sold out. It may be available through used book dealers.