In 1940, and probably for several years before and after, the Gene Autry cap pistol was the main industry in Kenton, Ohio, a town of then 7,000.

Colt: The Revolver of the American West 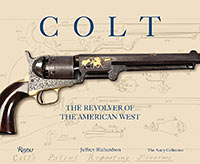 From the world's finest collection, the 100 most significant Colt revolvers are presented in this handsome volume. The Colt Single Action Revolver "won the West" by being the gun of choice on the American frontier, used by everyone from settlers and Native Americans to law-enforcement officers and outlaws. As a result of their shared history, the Colt revolver and the American West will forever be connected. Over its twenty-five-year history, the Autry Museum of the American West has compiled the finest assemblage of more than 500 Colt revolvers in the world, including the Colt Industries corporate collection. The Autry's curator has selected the 100 most important examples to document and celebrate the history of Samuel Colt's revolutionary invention. The revolvers include pieces of historical significance, opulently engraved specimens, and extremely rare models. Featured are an early prototype revolver, Wyatt Earp's and Theodore Roosevelt's favorite guns, and the first modern revolvers designed by Tiffany & Co. Each gun is described in a detailed essay, and additional artifacts—historical photographs and art, uniforms, hats, and holsters—are featured to place the revolvers in their proper historical context. This handsome volume is ideal for the collector or enthusiast of the American West.

To buy this book we are linking to our good friends at Out West Marketing.