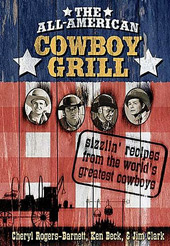 Blazing a new trail through the Old West, The All-American Cowboy Grill cookbook partners savory recipes from famous cowboys and cowgirls of the movies, television, rodeo, and music with mouth-watering recipes from some of the top working ranches of the western United States – all suitable for the home and patio grill.

With dozens of photos, this fun cookbook also features short articles on western history, western pop culture trivia from the movies and television, and information on famous western tourist sites such as the Museum of the American West, the Roy Rogers and Dale Evans Museum, Hubbard Museum of the American West, and the Pony Express National Museum.