Hollywood Hoofbeats: The Fascinating Story of Horses in Movies and Television, Second-Edition

Over a decade ago when Gene Autry Entertainment needed assistance creating our Champion section of the Official Gene Autry website, author Petrine Day Mitchum rode to our rescue with research and information. With so many horses portraying the Wonder Horse of the West, we were excited to work with such an informed gal as Petrine. In 2005 she released her book, Hollywood Hoofbeats which featured all of the Champions, including Little Champ. The book sold out and in the fall of 2014 Patrine and co-author Audrey Pavia announced the second-edition release of Hollywood Hoofbeats with I-5 Press.

The extended and updated second edition of Hollywood Hoofbeats is arguably the most complete collection of stories and photos documenting the history of horses in American cinema. Hollywood Hoofbeats is packed with behind-the-scene stories, first-account narratives, rarely-seen photographs, lobby cards and illustrations, offering a rich resource for movie buffs and horse lovers alike.

Hollywood Hoofbeats shines the spotlight on horses past and present, as well as their owners, trainers and co-stars by featuring:

Hollywood Hoofbeats would not be complete without an earnest look at the early days of the stunt horse. With truth and reverence, Mitchum reveals some of the more dangerous stunts horses were forced to perform before the days of animal rights and regulations. Hollywood Hoofbeats chronicles those harrowing times in stark detail and brings to light the sacrifices these horses made as they helped pave the way for increased laws and humane treatment for working horses and other animals. As Mitchum points out in her book, "Time and time again, movie trainers stress that the single most important ingredient in training a horse for any kind of work is trust." 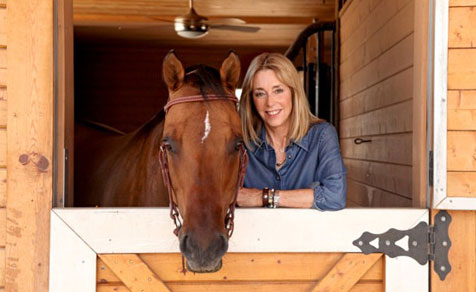