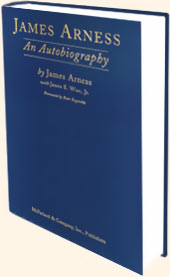 James Arness An Autobiography is the long anticipated, never-before-told account of one of the icons of twentieth-century television. There are many personal revelations of interacting with some of the Gunsmoke family ensemble, such as Miss Kitty, Doc and Festus. His own work as a producer is covered. Throughout are rare, previously unpublished photographs from the author's personal collection. Appendices include comments by show biz colleagues and fellow Gunsmoke alumni, and a sampling of letters received from his legions of fans. As befits the man, this large-size book is a beautifully printed work in accord with the highest library standards – a luxurious and extra-strong cloth binding, acid-free paper, carefully designed photographic and textual layouts and sophisticated typography. Actor and fellow Gunsmoke performer Burt Reynolds has written a foreword to the book.

James Arness was born May 26, 1923, in Minneapolis. He entered college just as World War II began and dreamed of being a naval aviator. It seemed as if every night his fraternity was having a party to send off a brother to the service. Young Arness got his interview with a naval flight program officer, but his hopes vanished as he was informed that his six foot seven inch height disqualified him automatically. He wrote his draft board asking that they call him up as soon as possible and so he ended up as a private in the famed Third Infantry Division where he earned a Bronze Star and the Purple Heart. Because of his stature, he was chosen to be first off the landing craft (to test the depth of the water) when his division landed at Anzio, Italy. He was subsequently wounded by enemy machine gun fire and spent eighteen months recovering in overseas and stateside hospitals.

Later his height would help him strike a commanding figure in the role of U.S. Marshal Matt Dillon of Dodge City. After Arness had toiled in Hollywood for a decade, John Wayne recommended him to CBS executives for the Gunsmoke part (after Wayne turned it down). As the principal performer of Gunsmoke for twenty years (1955-1975), the actor and the character took on mythic proportions – a born leader, honest and strong. Rare is the actor who has been cast in a role that so deeply fits his true self.

James Arness gives a full account of his early years, his family, his military career, his film work in Hollywood which included appearances in the cult-favorite science fiction movies Them! and The Thing. He had a long run on Gunsmoke, a role in the highly popular television miniseries How the West Was Won, and his post-theatrical period is also covered. 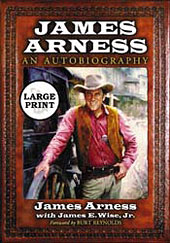 The publisher of James Arness An Autobiography, McFarland & Company, Inc., recently released the book in soft cover with large print.

To purchase this version of the book you'll need to order it through the publisher here.