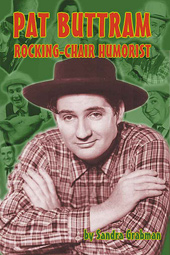 Pat Buttram is known by today's youth as the yodel-y voice in the Disney animated films The Rescuers, Robin Hood, The Fox and the Hound, The Aristocats and A Goofy Movie. To their parents, he's Mr. Haney, the hilarious con man from Green Acres; and to their grandparents, he's Gene Autry's humorous sidekick. Pat was one of Hollywood's truest success stories. He lived his dream of making people laugh, winning honors from the Pacific Pioneers Broadcaster's award all the way up to an Emmy, and everyone who knew him loved him. No one could keep an audience laughing as well as Pat could. This is his story, told for the first time by his many friends, family members, and co-workers at Gene Autry Enterprises.