Singing in the Saddle: The History of the Singing Cowboy 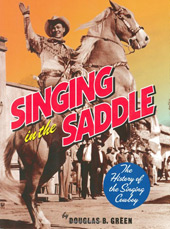 Who better to write a book about singing cowboys than a singing cowboy? Douglas B. Green is a music historian who is more prominently known as performer Ranger Doug (Idol of American Youth), founder of Western singing group Riders in the Sky. Gene Autry fans also know that he wrote the liner notes for the Grammy-nominated box set Sing, Cowboy, Sing!: The Gene Autry Collection. In this book, he traces the history of cowboy music, from popular songs such as Sweet Betsy from Pike to the instantly recognizable harmonies of the Sons of the Pioneers. More importantly, Ranger Doug reveals how the imagery of the singing cowboy has become such a potent force that even now country musicians don cowboy hats to symbolically take part in the legend. Nowhere have both the recorded history and the film history of the singing cowboy been collected in one volume, and this book is sure to become the resource for students of the genre. Also features a Singing Cowboy Time Line and a detailed bibliography with record album liner notes and songbooks.