Gene was the first Western star to perform at Madison Square Garden in New York City.

The Rodeo and Hollywood: Rodeo Cowboys on Screen and Western Actors in the Arena 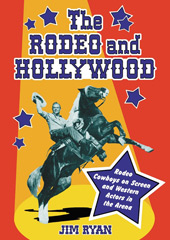 At rodeos in the 1940s, Gene Autry sang and jumped his horse, Champion, through a flaming hoop. In the 1960s rodeo arenas, Lorne Greene and Dan Blocker acted out a skit from their hit television show Bonanza. In the same era familiar rodeo personalities like Hoot Gibson and Slim Pickens could be seen in movies or television shows.

This reference book profiles performers who crossed over between film studio and rodeo arena when Hollywood and the rodeo circuit were closely linked. The first part traces the careers of notable rodeo stars who also contributed to film or television. The next two sections describe rodeo appearances of Western screen stars who entertained at rodeos. Some appeared solo and the others with a television co-star or two. The fourth section summarizes rodeo-related films. Appendices introduce golden age rodeo personalities and outline rodeos know for presenting Western stars.

A fan of Westerns from his youth in the 1940s, author Jim Ryan is a retired Army Signal Corps officer and special education teacher and lives in Colorado Springs. He is a member of the ProRodeo Hall of Fame Society, the Rodeo Historical Society, and the Dublin (Texas) Rodeo Heritage Museum.

Gene Autry Entertainment enjoyed working with Jim as he researched Gene Autry for this book and we highly recommend it for your collection!