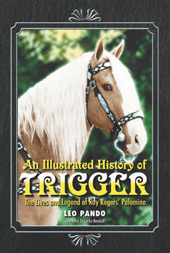 Gene Autry's horse was Champion. Roy Roger's horse was Trigger. Some folks confuse the two movie horses but there is no confusion that both are loved by B Western movie fans. Gene Autry Entertainment recommends this book to learn more about Trigger, regarded by many as the most famous movie horse of all time.

But in truth, "Trigger" was a composite of the original horse, a number of look-alikes and one extraordinary double named Little Trigger. This book is a detailed look at the animals and men who created and nurtured the legend of "the smartest horse in the movies." It covers the life story of the original horse and the look-alikes, as well as the story of "Trigger," the legend. A filmography lists all films in which Trigger appeared, including some without Roy Rogers. Television and personal appearances are also discussed. Covered in their own chapters are horse hero comic books and Trigger collectibles. Also included are a biography of Trigger's trainer Glenn Randall and a chapter on Roy Rogers as horseman.

Generous illustrations include many rare (some previously unpublished) photographs gathered from Trigger collectors nationwide, and even copies of Trigger's registration form and bill of sale.

And yes, author Leo Pando has provided some information on Champion!