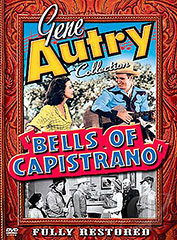 Synopsis:
A feud between two rival rodeo companies accelerates when both want Gene Autry, the popular singing cowboy, as a crowd-drawing added attraction. Originally released September 15, 1942 and the last movie he filmed before serving in World War II, Bells of Capistrano features Gene singing five hit songs, including "In Old Capistrano" and "Forgive Me."