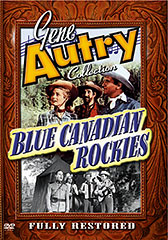 Synopsis:
Gene Autry and Champion crash through a maze of murder and mayhem on a dude ranch deep in the heart of the tall timber country. Montana rancher Cyrus Higbee sends Gene, his foreman, to Canada to stop the marriage of his daughter Sandra to Todd Markley, whom he suspects is a fortune hunter. Gene soon discovers that Sandra has turned the place into a dude ranch with entertainers Carolina Cotton and the Cass County Boys. When a mountie is murdered and lumberjacks threaten to take over, Gene and Pat Buttram must find the real murderer and bring peace to the Blue Canadian Rockies.

This DVD, sold individually, is now SOLD OUT. You can find the DVD as part of the box set listed below.