Gene frequently said, "Well, all right, sir," when ending a conversation or while changing a subject. 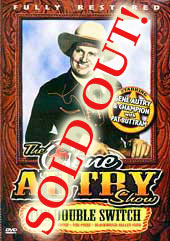 Saddle up, ride along and sing along with America's favorite cowboy into the golden age of television where a white hat meant hero and a guitar was just as handy as a pearl-handled six-gun.

Every week from 1950 to 1955, Gene Autry, the original singing cowboy and star of the rodeo ring, records, radio and the big screen, rounded up a whole herd of thrill-packed adventures and wagonloads of laughter right in America's living room. Now, newly restored and presented here for the first time on DVD, these fun-filled episodes feature the magnificent trick stallion Champion, Gene's unforgettable songs, funny-man Pat Buttram (Green Acres' Mr. Haney) and the worst claim jumpers, bank robbers and desperadoes the West had to offer.

So, load up your cap gun, grab hold of the reins and get ready to ride off into a black-and-white sunset on the dusty trail to action and excitement.

This is one DVD with four fully restored The Gene Autry Show episodes: "The Double Switch," "The Star Toter," "The Posse," and "Blackwater Valley Feud."

The Double Switch
Gene sets a cunning trap for a thieving rancher who tries to stage a phony holdup of money earmarked for fixing up county roads. Song: "When the Bloom Is on the Sage."

The Star Toter
When the town sheriff is killed by a bank robber, Gene takes over totin' the tin star and must bring the bandit to justice while convincing the thief's young son to forsake his father's ways and live on the straight and narrow. Song: "Back in the Saddle Again."

The Posse
Gene and Pat are hot on the trail of a gang of bank robbers while helping their old friend, notorious liar "Whopper" Daro, save face with his visiting daughter by pretending that he is the owner of Gene's ranch. Song: "Pretty Mary."

Blackwater Valley Feud
A land war heats up when a rancher is found murdered. Gene must clear the name of the framed rancher and bring the real killer to justice. Song: "That's My Home."

See its detailed Television page
Back to DVDs Index

To view the full details of these programs, including synopsis, cast and crew, and songs, visit The Gene Autry Show Season and Date List.