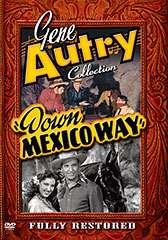 Synopsis:
When crooked film producers fleece the citizens of Sage City, Gene and Frog chase the con-men to Mexico. Once there, they must prevent the evil producers from swindling a wealthy Mexican rancher and his beautiful daughter, and expose the filmmakers for the schemers they are. Fay McKenzie makes her film debut in this lavishly produced musical Western.