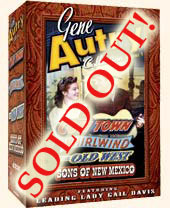 The Gene Autry Collection Featuring Leading Lady Gail Davis rounds up four Gene Autry – Gail Davis classic Western films together for the first time as a DVD box set. Gene Autry regarded Gail Davis as "the perfect Western actress" and she was Gene's number one leading lady appearing in 14 feature films from 1950 to 1953. An accomplished rider and trick shooter, Gail brings to the screen a spunky, no-nonsense heroine that can hold her own with any cowboy. Enjoy the very best of leading lady Gail Davis with America's Favorite Singing Cowboy, in their original glorious black and white movies now fully restored from Gene Autry's personal film archive.

Cow Town (1950)
Gene Autry, in order to save his cattle from marauding rustlers and starvation, fences in the open range with barbed wire. Before he knows what's happening, a murderous range war has broken out instigated by the crafty Sandy Reeves who wants to keep the wide-open spaces for his sheep. Gail Davis is the attractive heroine in this 1950 release featuring crashing action and catchy Western melody.

Whirlwind (1951)
Gene Autry is reunited with his former sidekick Smiley Burnette to blaze a trail of adventure, thrills, and suspense in this 1951 film. Known as the WHIRLWIND, Gene is an ace postal inspector who arrives in Red Bluff on Champion to work with fellow government representative Smiley Burnette to investigate a series of mail robberies. Together they give the old heave-ho to a crime syndicate muscling in on the U.S. Mail! Gail Davis and Thurston Hall are along for the ride through bullets, brawls, and bad men.

The Old West (1952)
Bronc buster Gene Autry trains wild steeds and then sells them to the Saddle Rock stagecoach line in the Old West. When his only competitor tries to wipe him out, Gene teams up with a preacher to tame the town that the law forgot. Gene is at his rockin', sockin' best singing songs of faith and participating in numerous gun battles as well as in a fast and furious stagecoach race. This 1952 Western features Gail Davis as the courageous stagecoach line manager, Pat Buttram as a humorous traveling peddler, and Little Champ who helps his pa and Gene.

Sons of New Mexico (1950)
Cattleman Gene Autry becomes the guardian of a wayward boy who is deeply in debt to a gambler. Gene sends him to the New Mexico Military Institute, hoping to straighten him out, but the lad flees and falls in with bad companions again and is framed for the murder of an ex-jockey. Gail Davis plays the feminine lead and Dick Jones is the troubled teen in this 1950 release full of rugged action and smooth Western melodies.