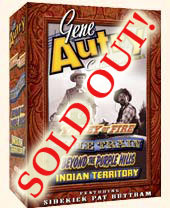 The Gene Autry Collection Featuring Sidekick Pat Buttram rounds up four Gene Autry – Pat Buttram classic Western films together for the first time as a DVD box set. Pat Buttram's hillbilly humor and physical comedy provide the comic relief in Gene's thrilling Western adventures. Loyal and true, Pat co-starred as Gene's sidekick in 17 movies from 1948 to 1952 and was along for the ride with Gene on television and radio, and in personal appearance tours and rodeos. Enjoy the very best of Pat Buttram's wit and witticism with America's Favorite Singing Cowboy, in their original glorious black and white movies now fully restored from Gene Autry's personal film archive.

Valley of Fire (1951)
Gene Autry is the newly elected mayor of a lawless California boomtown in 1850. His first official acts are to rid the town of its gambling king and to import a caravan of beautiful gals to help settle the wild and wooly townsmen. With the help of his marshal, Gene must then out-gun the nefarious renegades who want to kidnap the brides-to-be for a rival mining camp and take over the town. This 1951 Western features Gail Davis as one of the lovely ladies, Pat Buttram as Gene's trustworthy deputy, and Champion, World's Wonder Horse.

Mule Train (1950)
Marshal Gene Autry cracks the whip on Western killers as he rides Champion to the stirring rhythm of the great song sensation MULE TRAIN! Pat Buttram provides the comic relief as a prospector who discovers natural cement and is soon entangled with a menacing lady sheriff and a dam-building project. It's that MULE TRAIN rhythm! It's that Autry action...roarin' along together in a great Western drama!

Beyond the Purple Hills (1950)
Gene Autry takes over as a two-gun sheriff with Champion as his smartest deputy after bank robbers kill the former sheriff. When Judge Beaumont is murdered, circumstantial evidence points to the judge's wild son as the killer. Gene believes the young man is innocent and helps him battle a lynch mob and apprehend the real killers. Pat Buttram and Little Champ are along for the ride in Gene's hottest action picture!

Indian Territory (1950)
Gene Autry discards his conventional cowboy garb and white Stetson for the blue uniform of a sergeant in the post-Civil War Cavalry in this 1950 film. The Apaches have been incited to raid the ranchers and homesteaders on the Western frontier by the Apache Kid and Curt Raidler, a renegade Austrian, who wishes to use the Indians to build himself an empire in America. Gene is assigned to end the rioting and, at the same time, smash the group of gun-runners responsible. Gail Davis and Pat Buttram join in the gun-scorching Autry action.