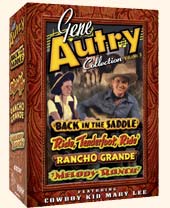 The Gene Autry Collection Featuring Cowboy Kid Mary Lee rounds up four Gene Autry – Mary Lee classic Wester`n films together for the first time in a DVD box set. Mary Lee starred in nine of Gene's films playing the kid sister or orphan "Patsy" and brings her youthful enthusiasm and amazing voice to these musical Westerns. No matter the situation or location, be it a dude ranch or a saloon, Mary Lee is always ready for adventure, and of course, a little singing by Gene's side. Enjoy the very best of Mary Lee's music with America's Favorite Singing Cowboy, in their original glorious black and white movies now fully restored from Gene Autry's personal film archive.

Back in the Saddle (1954)
When pollution from a nearby copper mine poisons hundreds of cattle, Gene Autry, two-fisted ranch foreman, faces a heap of trouble from all sides. Originally released in 1941, Back in the Saddle features Gene's signature song and his lovable sidekick, Smiley Burnette.

Ride, Tenderfoot, Ride (1940)
Cowboy Gene Autry inherits the Belmont Packing Company and the management duties that come with it. When a rival company owned by a pretty socialite plots to force Gene to sell, a feud soon ensues between the lady, who uses her womanly wiles to take business from Gene, and the cowboy who tries to recover by using old-time rally methods, including parades and bands. Smiley Burnette, June Storey, and Mary Lee are along for the ride in this Musical Western. Songs include "Eleven More Months" and "Ten More Days," "Woodpecker," and "Ride, Tenderfoot, Ride."

Rancho Grande (1940)
Gene Autry is the foreman of a ranch mortgaged to the hilt with a fast approaching deadline to build a dam. When the owner dies and heirs the Rancho Grande to his three madcap grandchildren, Gene must straighten out the rebellious young folks and make them work to pay off the debt and foil the villains. It will take brawn, brains, and of course a few songs, to uncover the secret plot to take over Rancho Grande. Songs include "Dude Ranch Cowhands," "Whistle," and "Alla En El Rancho Grande."

Melody Ranch (1940)
Lawlessness runs rampant in Gene's hometown of Torpedo until the movie and radio cowboy returns as Honorary Sheriff for a Frontier Days celebration and cleans up the town. Showcasing classics like "We Never Dream The Same Dream Twice" and its title song, and featuring Jimmy Durante and Ann Miller, this musical was Gene's biggest theatrical production when it was released November 15, 1940.