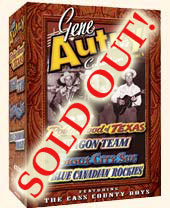 Robin Hood of Texas (1947)
Gene Autry and the Cass County Boys, flat broke and stranded, are unjustly arrested as musical bank bandits. Released by the police as decoys to locate the loot, Gene and the boys renovate a dude ranch only to find themselves in more trouble with rival gangsters in search of the money. Originally released in 1947, the film features the song "Goin' Back to Texas" and Gene's legendary fisticuffs as well as chases by horse and car.

Wagon Team (1952)
Stagecoach Detective Gene Autry has himself jailed so he can work on the conscience of young Dave Weldon, suspected thief of an Army payroll. Dave escapes, much to the disgust of Deputy Pat Buttram, but Gene catches up with him at the traveling medicine show run by the young man's father, sister, and the Cass County Boys. It's a sharpshooting showdown with the bordertown boss when Gene and Champ go after the missing payroll and the misguided teen-age bandit!

Sioux City Sue (1946)
Gene trades in his wings for a pair of spurs in his first movie after returning from World War II. To get his ranch out of dire finacial straits, Gene reluctantly goes to Hollywood to make a movie. But his real troubles begin on his return when everyone finds out he's the voice of Ding Dong the animated singing donkey, and his nemesis tries to drive him to ruin. Released November 21, 1946, this classic features Sterling Holloway and the hit "Oklahoma Hills."

Blue Canadian Rockies (1952)
Gene Autry and Champion crash through a maze of murder and mayhem on a dude ranch deep in the heart of the tall timber country. Montana rancher Cyrus Higbee sends Gene, his foreman, to Canada to stop the marriage of his daughter Sandra to Todd Markley, whom he suspects is a fortune hunter. Gene soon discovers that Sandra has turned the place into a dude ranch with entertainers Carolina Cotton and the Cass County Boys. When a mountie is murdered and lumberjacks threaten to take over, Gene and Pat Buttram must find the real murderer and bring peace to the Blue Canadian Rockies.