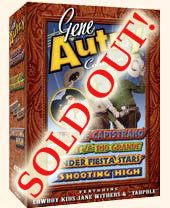 The Gene Autry Collection Featuring Cowboy Kids Jane Withers and Tadpole rounds up four Gene Autry classic Western films with talented teens. Like most kids in 1940, singer Jane Withers was a huge Gene Autry fan, and since she was a Twentieth Century Fox movie star, she brokered a deal to make a movie with her number one cowboy hero. Joseph Strauch, Jr., better known as Tadpole, played the younger brother of Gene's sidekick pal Smiley Burnett's Frog Millhouse character. Tadpole and Frog provided the comic relief in five of Gene's films with their matching whimsical outfits and brotherly mischievous antics. Enjoy the very best of these talented cowboy kids in their original glorious black and white movies now fully restored from Gene Autry's personal film archive.

Bells of Capistrano (1942)
A feud between two rival rodeo companies accelerates when both want Gene Autry, the popular singing cowboy, as a crowd-drawing added attraction. Originally released September 15, 1942 and the last movie he filmed before serving in World War II, Bells Of Capistrano features Gene singing five hit songs, including "In Old Capistrano" and "Forgive Me."

Heart of the Rio Grande (1942)
Ranch foreman Gene Autry tames a spoiled teenage shrew sent to Smoke River Dude Ranch for the summer and in the process humanizes her father into becoming a better parent. Originally released in 1942 this film features that year's hit song Deep in the Heart of Texas and several other delightful tunes. Action includes stampeding horses, a runway truck and a daring climatic rescue!

Under Fiesta Stars (1941)
Rodeo star Gene Autry and a spirited young city gal jointly inherit a ranch and mine. When crooks try to buy the property, she wants to sell, but Gene wants to operate the mine. It takes all of Gene's charm and musical talents to persuade her to see things his way. This 1941 release introduced the character of Tadpole, Frog's little brother, who leads a rescue party in the action-packed climax.

Shooting High (1940)
Twentieth Century Fox star Jane Withers was so enamored of Gene Autry that she persuaded the studio to sign the Singing Cowboy as her leading man. In this 1940 release Gene plays Will Carson whose grandfather was the town's hero. A Hollywood company arrives to film the story and hires Will as the technical advisor and stunt double. When the star suddenly abandons the film, Will steps in to save the day. Songs include "There's Only One Love in a Lifetime" and "Little Old Band of Gold."