Gene was a compulsive gatherer of information and read three to four papers every day. 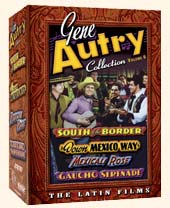 The Gene Autry Collection – The Latin Films rounds up the best of America’s Favorite Singing Cowboy's movies with a flavor from "south of the border." The Latin American theme of friendship across the border comes through whether it's Gene Autry and his horse Champion riding "down Mexico way" to stop foreign spies, or it's Gene and Smiley trailing phony movie producers to Mexico to help out some swindled townsfolk. Along the way Gene is sure to sing a song or two in Spanish to a lovely "Mexicali Rose." Enjoy the very best of these Latin-themed musical westerns in their original glorious black and white now fully restored from Gene Autry's personal film archive.

South of the Border (1939)
On the eve of World War II, Federal agents Gene Autry and Smiley Burnette are sent South of the Border to help foil the plans of foreign spies attempting to gain control of Mexican oil fields. Full of action, humor and music, this 1939 release introduced both the title song and teen performer Mary Lee to movie audiences.

Down Mexico Way (1941)
When crooked film producers fleece the citizens of Sage City, Gene and Frog chase the con-men to Mexico. Once there, they must prevent the evil producers from swindling a wealthy Mexican rancher and his beautiful daughter, and expose the filmmakers for the schemers they are. Fay McKenzie makes her film debut in this lavishly produced musical Western.

Mexicali Rose (1939)
Hired as a radio singer, singing cowboy Gene Autry soon discovers the show's sponsor is a crooked oil company cheating, among others, an orphanage on the Mexican border. With the aid of a music-loving bandit, Gene and Smiley Burnette ride to the rescue. Spine-tingling thrills, breathtaking action, and heart-warming songs are all rolled into this great western adventure! Songs include "You're the Only Star in My Blue Heaven," "Rancho Grande," and "Mexicali Rose."

Gaucho Serenade (1940)
A case of mistaken identity sends Gene and Frog (Smiley Burnette), two down-and-out ex-rodeo stars, on a rip-roaring, cross-country trek as they help a little boy evade the gangsters responsible for the false imprisonment of his father. This "road picture," originally released in 1940, features Duncan Renaldo, TV's popular Cisco Kid, and counts "A Song at Sunset" among its classic tunes.

These films will be available for digital streaming on Shout! Factory TV.

South of the Border