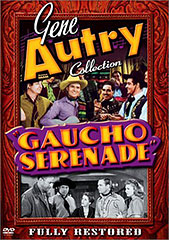 Synopsis:
A case of mistaken identity sends Gene and Frog (Smiley Burnette), two down-and-out ex-rodeo stars, on a rip-roaring, cross-country trek as they help a little boy evade the gangsters responsible for the false imprisonment of his father. This "road picture," originally released in 1940, features Duncan Renaldo, TV's popular Cisco Kid, and counts "A Song at Sunset" among its classic tunes.