When the famous "Hollywood" sign fell into disrepair in 1978, various entertainers agreed to buy a letter for $27,777.77. Gene bought the first "L." 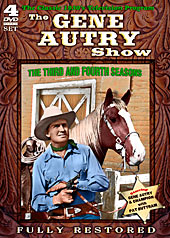 Synopsis:
The latest DVD release of The Gene Autry Show from Timeless Media and Flying A Pictures includes both Season Three and Season Four of this classic Western television series. Originally broadcast in 1953, each season has 13 episodes making this box set a total of 26 episodes plus bonus items.

Gene Autry is the only entertainer with all five stars on Hollywood's Walk of Fame, one each for Radio, Recording, Motion Pictures, Television and Live Performance. By the middle of the 20th Century, Autry was a box office smash with his musical B Westerns, touring with his rodeo across the United States and the British Isles, and had several gold records, including his Christmas classic Rudolph, the Red-Nosed Reindeer.

Now, for the first time on DVD, the complete Season Three and Season Four of Gene Autry's landmark Television series The Gene Autry Show is brought home in these fully restored and uncut episodes from Autry's personal film and television archive. See for yourself why the hard-riding, furious-fighting, and smooth-singing Gene Autry is considered America's favorite cowboy.