Heart of the Rio Grande 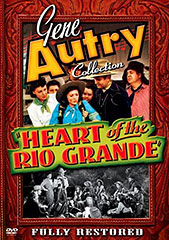 Synopsis:
Ranch foreman Gene Autry tames a spoiled teenage shrew sent to Smoke River Dude Ranch for the summer and in the process humanizes her father into becoming a better parent. Originally released in 1942 this film features that year's hit song "Deep in the Heart of Texas" and several other delightful tunes. Action includes stampeding horses, a runway truck and a daring climatic rescue!