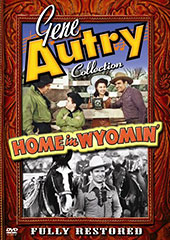 Synopsis:
Radio star Gene Autry must solve a murder mystery at the Frontier Days pageant that involves Chicago gangsters, a deserted mine, and a surprise ending. Musical highlights are Any Bonds Today and I'm Thinking Tonight of My Blue Eyes. Released in 1942, the film features leading lady Fay McKenzie, comic sidekick Smiley Burnette, and Joseph Strauch, Jr. as Tadpole.