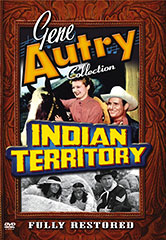 Synopsis:
Gene Autry discards his conventional cowboy garb and white Stetson for the blue uniform of a sergeant in the post-Civil War Cavalry in this 1950 film. The Apaches have been incited to raid the ranchers and homesteaders on the Western frontier by the Apache Kid and Curt Raidler, a renegade Austrian, who wishes to use the Indians to build himself an empire in America. Gene is assigned to end the rioting and, at the same time, smash the group of gun-runners responsible. Gail Davis and Pat Buttram join in the gun-scorching Autry action.