Last of the Pony Riders 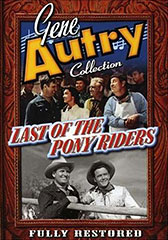 Synopsis:
Gene Autry hits the danger trail to crush the badmen out to cripple the Pony Express in his final theatrical release Last of the Pony Riders. With the East and West now linked by telegraph, Gene looses his Pony Express job. He buys a stagecoach to carry government mail and soon discovers that crooks are trying to sabotage the express operations for their own benefit. Gene, his sidekick Smiley Burnette, and Champion must track down the renegade wreckers and administer six-gun justice to save their Pony Express pals!