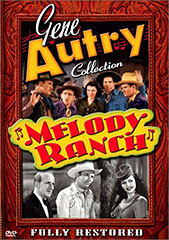 Synopsis:
Lawlessness runs rampant in Gene's hometown of Torpedo until the movie and radio cowboy returns as Honorary Sheriff for a Frontier Days celebration and cleans up the town. Showcasing classics like "We Never Dream The Same Dream Twice" and its title song, and featuring Jimmy Durante and Ann Miller, this musical was Gene's biggest theatrical production when it was released November 15, 1940.