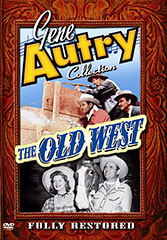 Synopsis:
Bronc buster Gene Autry trains wild steeds and then sells them to the Saddle Rock stagecoach line in the Old West. When his only competitor tries to wipe him out, Gene teams up with a preacher to tame the town that the law forgot. Gene is at his rockin', sockin' best singing songs of faith and participating in numerous gun battles as well as in a fast and furious stagecoach race. This 1952 Western features Gail Davis as the courageous stagecoach line manager, Pat Buttram as a humorous traveling peddler, and Little Champ who helps his pa and Gene.