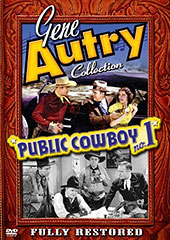 Synopsis:
Gene Autry's tried and true crime fighting methods are put to the test when cattle rustlers employ modern technology – including refrigerated trucks, planes and two-way radios – in Public Cowboy No. 1. Things get worse when the local newspaper gal's scathing editorials bash Gene's old-fashioned methods and demand the locals call in "progressive" big city detectives. It's up to Gene and his horse Champion, along with pal Frog Millhouse, to prove that the Western straight-shooting methods of dealing with crime still hold true!