Ridin' on a Rainbow 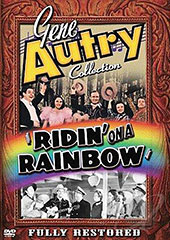 Synopsis:
Assisting in the search for murderous bank robbers, rancher Gene Autry goes undercover as a showboat entertainer to capture the crooks and recover the money. Key to their investigation is the young singer Patsy, played by Mary Lee. Action-packed from ship to shore, the film's showstopping musical numbers include Gene's performance of "Be Honest with Me," nominated for an ACADEMY AWARD® for Best Song of 1941.