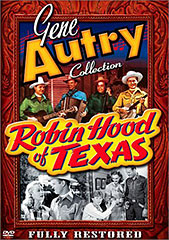 Synopsis:
Gene Autry and the Cass County Boys, flat broke and stranded, are unjustly arrested as musical bank bandits. Released by the police as decoys to locate the loot, Gene and the boys renovate a dude ranch only to find themselves in more trouble with rival gangsters in search of the money. Originally released in 1947, the film features the song "Goin' Back to Texas" and Gene's legendary fisticuffs as well as chases by horse and car.