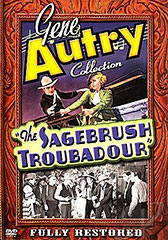 Synopsis:
Rangers Gene Autry and Frog Millhouse travel undercover as western troubadours to find the killer of old, half-blind Frank Martin. Their only clues are a guitar string and a swayback horse that is the key to finding the dead man's lost goldmine. Complicating matters is the old man's granddaughter, a blonde cyclone of a gal, who is suspicious of Gene and Frog and hires them to supply the music for her grand masquerade dance so she can keep an eye on them. Released in 1935, The Sagebrush Troubadour is a musical Western with melody, mirth, and mystery.