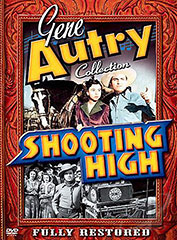 Synopsis:
Twentieth Century Fox star Jane Withers was so enamored of Gene Autry that she persuaded the studio to sign the Singing Cowboy as her leading man. In this 1940 release Gene plays Will Carson whose grandfather was the town's hero. A Hollywood company arrives to film the story and hires Will as the technical advisor and stunt double. When the star suddenly abandons the film, Will steps in to save the day. Songs include "There's Only One Love in a Lifetime" and "Little Old Band of Gold."


* Sadly, the Melody Ranch Theater master for Shooting High is lost. Gene Autry Entertainment is still searching high and low for it. In the meantime, please enjoy Gene Autry and Pat Buttram's discussion of the film In Old Santa Fe, Gene's first performance on film. Clips with Gene Autry from In Old Santa Fe are also included on the DVD.


Back to DVDs Index