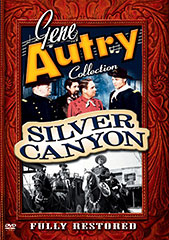 Synopsis:
During the Civil War, U.S. Army scouts Gene Autry and "Cougar" Claggett are detailed by the cavalry to bring in a notorious gang of Confederate guerrilla raiders who are interfering with federal supply lines. Gene traces them to a small Army outpost where he becomes entangled with the colonel's son, who supports the guerrillas, and daughter, who does what she can to fight them. When the outlaws set out to ravage the town, they clash with Gene and vengeful townsmen in an all-out, bullet-blazing battle. Pat Buttram, Bob Steele, and Gail Davis enhance the exciting chases on horseback, the hand-to-hand slugfest, and the blazing gunfire. Plus, Gene sings a song or two along the way.