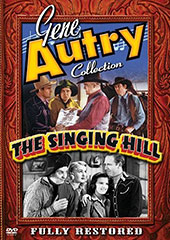 Released:
May 1, 2007
By Image Entertainment

Synopsis:
Ranch foreman Gene Autry must take unusual measures to prevent a spoiled society girl from selling her inherited ranch to a ruthless banker and thus causing upset for the neighboring ranchers. Whether it's masquerading as musicians with his sidekick Frog Millhouse and orphan Patsy, or getting the heiress declared incompetent with the help of a friendly old judge, Gene does whatever it takes to protect the range. In between the action and comedy Gene sings a few songs including "Blueberry Hill" and "The Last Round-Up."