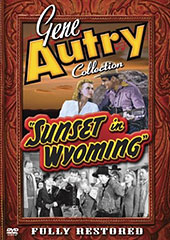 Synopsis:
Rancher Gene Autry is a conscientious cowboy who must save his valley from flooding caused by a lumber company that is stripping the top of Mount Warner without planting new trees. Gene and his side kick Frog Millhouse, played by Smiley Burnette, hatch a plan to declare the mountain a state park and wildlife shrine. It will take guns, guitars, and several wild animals from the zoo to get the job done!