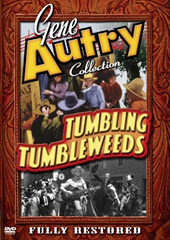 Synopsis:
Billed as "a new kind of entertainment with music, thrills and comedy" in 1935, Tumbling Tumbleweeds presented Gene Autry as "radio's silver voice now heard on the talking screen in trills, thrills and spills." Singing cowboy Gene Autry is thrown into the midst of the mysterious killing of his father and to make matters worse, his best friend is accused of the crime. This rip-roaring Western has daring rescues, an old time medicine show, fast riding, hard-hitting fistfights, rib-tickling antics from Smiley Burnette, and the sensational songs of Gene Autry!