Twilight on the Rio Grande 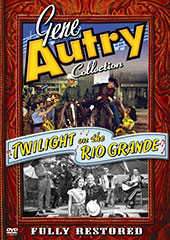 Synopsis:
Gene Autry saddles up for Mexico in a fabulous fiesta of flying fists and sparkling songs the way only Gene can swing 'em and sing 'em. When his partner is killed, Gene finds himself in a border town where he must solve the murder and round up a gang of border smugglers. A beautiful Cantina singer, sidekick Pokie, the Cass County Boys, and Champion, Jr. are along for the ride in this film full of hell-for-leather action of a western combined with a thrill-packed whodunit.