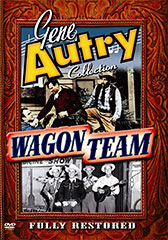 Synopsis:
Stagecoach Detective Gene Autry has himself jailed so he can work on the conscience of young Dave Weldon, suspected thief of an Army payroll. Dave escapes, much to the disgust of Deputy Pat Buttram, but Gene catches up with him at the traveling medicine show run by the young man's father, sister, and the Cass County Boys. It's a sharpshooting showdown with the bordertown boss when Gene and Champ go after the missing payroll and the misguided teen-age bandit!