When he was a young man, Gene received an offer from a professional baseball team to become a player. Gene turned down the offer because it would have meant a fifty-dollar-a-month pay cut from his telegrapher's job. 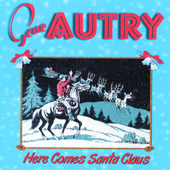 Gene Autry recorded new versions of his greatest Christmas songs in the 1950s and ’60s and for the first time ever they are together on one CD, Here Comes Santa Claus.

This collection includes rare recordings of "Buon Natale," "Santa's Comin' in a Whirly Bird," and Gene's telling of "The Story of the Nativity" as well as the holiday favorites "Here Comes Santa Claus," "Sleigh Bells," and "Thirty Two Feet, Eight Little Tails."

The liner notes, featuring vintage Gene Autry Christmas card artwork, are by Mr. and Mrs. Autry's Executive Assistant Maxine Hansen. Also included is a history of Gene Autry and the Hollywood Christmas Parade by the Honorary Mayor of Hollywood, Johnny Grant. Here Comes Santa Claus is an excellent album for all generations.

The masters used for this package are from Gene Autry's personal archives and recordings.

The cover illustration is from one of the many personal Christmas cards commissioned by Gene Autry in the 1940s and 1950s.

This album is available on CD.

Listen on Spotify
This album is available digitally on Spotify.

Purchase on iTunes
This album is available digitally on iTunes.

Rudolph, the Red-Nosed Reindeer and Other Christmas Classics
CD