By 1948, the Dell Publishing Company turned out over one million Gene Autry Comics each year.

Gene Autry: That Silver Haired Daddy of Mine 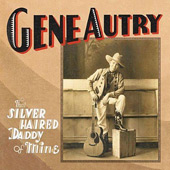 Bear Family Records of Germany is regarded as the world's greatest record label for American vintage country music and rock'n'roll, German and International oldies, chansons, jazz and cabaret. Like many Bear Family projects, this nine CD box set of Gene Autry recordings from 1929 to 1933 has taken years to research, compile, and complete. This box set is a comprehensive collection of every recording by Gene during this time period, which is why you’ll find multiple versions of the same song.

Bear Family Records box sets have been described as “the ultimate collector’s editions for the true fans” due to the extensive nature of their releases. This set will be expensive, which is why we recommend that if you are planning to purchase this nine CD box set of early Gene Autry Recordings you do so from Autry Museum of the American West's Store. Your Museum membership includes a discount at the store – so take advantage of this benefit!

As soon as Gene Autry Entertainment has its copy of this collection, we will post further information on this page such as dates of the recordings, box set production credit, and liner notes details. Although we have not yet heard the CDs, the Bear Family Records’ reputation of high technical standards leads us to expect the very best quality possible.

This album is only available in digital format.

Very few people know that Gene Autry...America’s beloved Singing Cowboy, began his career as the writer and performer of authentic white country blues. While working as a telegrapher for the St. Louis and San Francisco Railroad - the Frisco Line - he used a railroad pass to travel to New York in 1929, hoping to follow his dream of competing with the top pop singers of the day. Instead, on the advice of Frankie and Johnny Marvin, and legendary producer Arthur Satherley, Autry used his talent to emulate Jimmie Rodgers. No other performer caught the essence of Jimmie Rodgers as Autry did. He could match Rodgers' yodel, Mississippi dialect and guitar runs so closely that it was often hard to tell the two apart. Yet, as he performed more and more original songs in the Rodgers style, he began to develop a sound of his own.

Producing records for a variety of labels such as Gennett, Victor, and Columbia, as well as various low budget labels ('dime-store platters') owned by ARC, Gene sold lots of records during the Depression when people could least afford to buy them. In the early 1930s, Gene with the guidance of his mentor Jimmy Long and Art Satherley, moved from blues to the more traditional hillbilly music of the time. His duet with Long on the mountain ballad "That Silver Haired Daddy of Mine," recorded in October of 1931, became a million-selling record. Quickly following that success with other songs, such as "My Old Pal of Yesterday," "Missouri Is Calling," "The Little Ranch House on the Old Circle B" and "Louisiana Moon," Gene went on to transform himself into America’s preeminent singing cowboy.

With the 225 songs on this 9 CD box, Bear Family Records brings together all of the surviving recordings from 1929 – 1933 for the first time ever. Most of these songs have never been on CD, and many have not been available in any form since their original release 75 years ago, including more than 20 songs that are issued here for the first time.

The hardcover book contains an essay by Packy Smith, a discography by Tony Russell, and many rare pictures and illustrations.