Here is the official press release for the book Hollywood Hoofbeats: Trails Blazed Across the Silver Screen, by Petrine Day Mitchum and Audrey Pavia from the book's publisher BowTie Press.

Author takes the definitive look inside the rich history of horses in Hollywood, covering Westerns, epics, comedies, family films and much more. 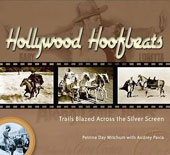 From the first movie star, a racing trotter with the unlikely name of Abe Edgington, to the six different horses who brought Seabiscuit to bigscreen life, the history of Hollywood is studded with great animals who have performed dangerous stunts, made actors look good, and thundered across the screen carrying many of our biggest human stars, including Errol Flynn, John Wayne, Clint Eastwood, Tobey Maguire and Russell Crowe. Now, Petrine Day Mitchum has told the story of what she calls “horse actors” in a way that’s never been done, producing the definitive chronicle of horses in the movies with Hollywood Hoofbeats: Trails Blazed Across the Silver Screen (BowTie Press, October 2005).

“It’s been a burr under my saddle, if I can use a riding term, that when people think of horses in Hollywood they don’t think any further than the Westerns,” Mitchum says. “The real story starts in the silent era and goes through to today, and it’s a much richer and more interesting history than people realize.”

The equine characters in her book are as vivid as the human ones: there’s Tom Mix’s famous Tony the Wonder Horse, as temperamental and talented as his partner. There’s George, the majestic Spanish horse who carried Russell Crowe in Gladiator and Orlando Bloom in Kingdom of Heaven, among many others. There’s Fido, who clowned alongside Jackie Chan in Shanghai Noon. There’s Steel, the favored horse among movie stars of the 1930s and ’40s—including, in three films, the author’s father, Robert Mitchum.

As she tells the stories of these and scores of other notable horses, Mitchum uncovers little-known facts, including how many different Triggers Roy Rogers owned and exactly how television star Mr. Ed “talked.” And she tells how dangerous stunts involving horses are done, from the chariot race in Ben-Hur to the epic battle scenes in The Lord of the Rings and the fight between a horse and leopards in Hidalgo.

The handsome, lavishly illustrated chronicle, written by Mitchum with Audrey Pavia, traces the story back to the earliest days of film, from Eadweard Muybridge’s famous motion studies of horses and Thomas Edison’s one-reel “Kinetoscope” films to breakthroughs like The Great Train Robbery. In these pages are the early screen cowboys and their star horses, the magnificently trained stunt horses of the golden age of the Western movie, and the horses who were an integral part of epics from the controversial Birth of a Nation to the Oscar®-winning Gladiator. She doesn’t neglect children and horses (National Velvet, Black Beauty, The Black Stallion) or the comic horses of television comedies and movies like Cat Ballou, whose equine star was so memorable that upon winning an Academy Award for best actor, Lee Marvin famously commented, “I think half of this belongs to a horse somewhere out in the Valley.” And she brings the story into the present day with inside stories from the sets of such recent hits as The Horse Whisperer, Cold Mountain, Troy and The Last Samurai.

Mitchum also traces the treatment of movie horses over the decades, applauding those who treated their horses well and exposing those who didn’t. Hollywood Hoofbeats tells these stories alongside the tales of the horses, the cowboys, the actors, the trainers and the men who ran the huge stables that once supplied horses to Hollywood. It’s a fascinating world responsible for countless classic cinematic moments that continue to this day, but a world that is seldom explored in this kind of depth and detail. Mitchum, though, was granted complete entrée to its people and its secrets, along the way learning a few things about her famous father, his steeds, and the esteem in which stuntmen and colleagues held him. “It was really wonderful to hear how much people loved and respected him,” she says. “And it made me realize that with my background, I was the perfect person to do this book.”

Petrine Day Mitchum began riding when she was two years old, and was given a love of both movies and horses by her father, the late actor Robert Mitchum. She has worked as a story editor and story analyst for several production companies, and has written for Horse Illustrated. She lives in Santa Ynez, California with two dogs and an American Quarter Horse, Photo Op.

Audrey Pavia is a former editor of Horse Illustrated who writes frequently on equine and other topics. She and her husband live in Norco, California, with a menagerie of animals.