By 1948, the Dell Publishing Company turned out over one million Gene Autry Comics each year.

Here is the official press release for the book Honky-Tonk Heroes and Hillbilly Angels: The Pioneers of Country and Western Music, by Holly George-Warren and illustrated by Laura Levine from the book's publisher Houghton Mifflin Company.

"Anyone who's a fan of country music—no matter what their age—will love this great-looking book. I intend to give it to all of my grandchildren, and it will have a permanent place on the Jones family bookshelf for generations to come." — George Jones

A traveling fruit tree salesman... A mother of four by the age of eighteen... A shoeshine boy, a drugstore clerk, a train engineer... 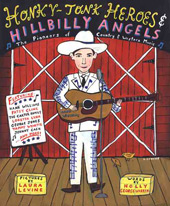 Discover the surprising beginnings and humble origins of the charismatic pioneers who helped shape the country and western scene into the influential musical empire it is today. This collection of fifteen biographies and illustrated portraits takes snippets from each performer's life, placing them into the context of country and western music and highlighting each person's contribution to the genre. Laura Levine's full-page folk art – flavored portraits perfectly showcase each musician.

From the pair who brought us Shake, Rattle, and Roll: The Founders of Rock and Roll (2001) come inspiring stories and captivating portraits of music legends such as Hank Williams, Patsy Cline, Loretta Lynn, George Jones, Johnny Cash, Gene Autry, and more unforgettable people who changed the face of music forever!

Acclaim for Shake Rattle and Roll: The Founders of Rock and Roll (2001)

“A wonderfully entertaining browsing book that will also fill a gap in most music collections.” — School Library Journal

“All hail rock-and-roll in a book that's fun to look at and informative.” — Booklist

Holly George-Warren is an award-winning writer, editor, producer, and music consultant. She has contributed to more than two dozen books about music, including The Encyclopedia of Country Music, Classic Country, and The Rolling Stone Illustrated History of Rock & Roll. She's also written for the New York Times, the Village Voice, the Journal of Country Music, and Rolling Stone. Honky Tonk Heroes and Hillbilly Angels is her second book for children. Ms. George-Warren lives in upstate New York with her family.

Laura Levine is a self-taught artist whose award-winning illustrations have appeared in numerous magazines and books and on CD covers. Her paintings have been exhibited at the Museum of International Folk Art in Santa Fe, New Mexico, the House of Blues, the Experience Music Project, Kunstmuseum Luzern, and the Rock and Roll Hall of Fame and Museum. Levine's previous career as a music photographer is what originally inspired her ongoing series of paintings of music's early pioneers, on which Honky Tonk Heroes and Hillbilly Angels is based. Her first children's book, Wig!, was a collaboration with the B-52s. Ms. Levine lives in New York City.