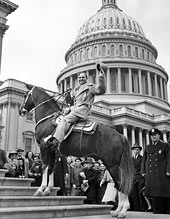 Los Angeles (January 7, 2008)—From Theodore Roosevelt to George W. Bush, United States presidents have used the powerful iconographic symbol of the heroic American cowboy to define themselves and their administrations to the nation and the world. In this election year, the Autry National Center explores the fascinating and ongoing intersection of cowboy culture and presidential politics in Cowboys and Presidents, which opens on April 12, 2008.

This timely exhibition includes many historically important images and artifacts that are associated with a host of American presidents, such as Benjamin Harrison’s longhorn chair; Theodore Roosevelt’s personal photo album of his ranch; Calvin Coolidge’s electric exercise horse and cowboy outfit; Lyndon B. Johnson’s famous Stetson hat; Ronald Reagan’s cowboy boots adorned with a map of Texas; Bill Clinton’s childhood drawings based on the film High Noon; and the Saddle of Independence, given to George W. Bush in memory of the 9/11 attacks.

Motion pictures, television, radio, and music enhance the exhibition and visitors are invited to cast their votes on thought-provoking issues in interactive voting booths. Presidential connections to California and the West can be found throughout the exhibition, including highlights on Ronald Reagan, Hollywood, and Western trips by many of the featured presidents.

The presidency became intertwined with the cowboy image at the turn of the twentieth century and was used by the press, foreign governments, and domestic political opponents to praise or criticize presidential policy and leadership. Cowboys and Presidents reveals the media’s impact on the cowboy imagery in both domestic and international contexts through photographs, political cartoons, motion pictures, and newsreels.

For much of the nineteenth century, cowboys enjoyed a generally sullied reputation as coarse, reckless, and violent. In the mid-1880s, the negative use of the term "cowboy" entered politics and began to be applied to politicians and political parties. By 1900, however, writers, artists, and entertainers transformed the cowboy’s unsavory reputation into that of a youthful, energetic, and virtuous Anglo-Saxon hero. In the years that followed, Theodore Roosevelt introduced the cowboy hero to the presidential political arena. His experience, both as a rancher in Dakota Territory in the mid-1880s and as head of the famed Rough Riders, a regiment made up largely of Western cowboys, vaulted him first into the vice presidency in 1900 and then into the nation’s highest office a year later. Roosevelt helped redefine the cowboy’s character and carried both sides of the cowboy image into the White House, where it has remained for more than a century.

Over the past 100+ years, presidents have incorporated the cowboy image in their language, dress, manners, and actions, particularly in public, during campaigns, debates, speeches, nominating conventions, and inaugural activities. Calvin Coolidge, the unlikeliest of cowboy presidents, assumed the icon’s easygoing manner in 1927 by donning a cowboy outfit that included a wide-brimmed hat, high-heeled boots, and a pair of chaps with "CAL" spelled out in metal studs down each leg. The New York Times applauded the transformation, noting that "he suppressed his natural reserve and became a part of the country." At a campaign stop in Oklahoma City in February 1988, George H. W. Bush, having learned some valuable lessons about the political usefulness of the cowboy image as vice president under Ronald Reagan, addressed a rally in Rodeo Hall at the National Cowboy Hall of Fame. In his speech he compared the sport of rodeo with rough-and-tumble politics. "You learn that the rodeo is full of hard encounters with the ground," he observed. "And you learn to pick yourself up and dust yourself off."

On the eve of the 2008 election, the debate over cowboys and presidents continues. Some of the new crop of presidential candidates, including Barack Obama, Rudy Giuliani, and Fred Thompson, have already shown a willingness to identify with the cowboy by donning cowboy hats and/or boots on the campaign trail. Hillary Clinton seems to have, at least for now, rejected the heroic icon. On September 30, 2007, she told an audience in Oakland, California, that on her first day as president she would dispatch diplomats to countries around the world bearing the message that "the era of cowboy diplomacy is over." Few symbols communicate the ideas of good and evil, common sense, resolute action—and America—more clearly or succinctly. For that reason, if for no other, cowboys and presidents probably have not taken their last ride together.

The Autry National Center explores the experiences and perceptions of the diverse people of the American West, connecting the past with the present to inform our shared future.

Museum of the American West

The Museum of the American West explores the interwoven histories and myths of the American West and its diverse peoples. The museum enhances our understanding of the present by collecting, preserving, and interpreting objects and art, making connections between people today and those who have shaped the past. It is located in Griffith Park.

The Museum of the American West and Museum Store are open Tuesday through Sunday, 10 a.m. to 5 p.m. From June 1 to August 31, Thursday hours are 10 a.m. to 8 p.m. Admission is free on the second Tuesday of every month and free for veterans year-round.