The Autry Museum of the American West in Los Angeles, California recently debuted a special case titled "The Cowboy Is a Patriot: Gene Autry in World War II."

July 2017 marks the 75th anniversary of Gene Autry's enlistment in the U.S. military during World War II. Before the war began, Autry was the iconic singing cowboy, entertaining millions through radio, records, film, and in-person performances. In 1942, he enlisted in the U.S. Army Air Corps, risking his life, sacrificing career opportunities, and lifting the morale of his fellow Americans. After the war, Autry would rebuild his career in a changing America. This new case features artifacts from Autry's military service, including his aviator helmet, goggles, and ID cards from his USO performances in the South Pacific near the end of the war.

The special case will be on view through the summer of 2018 in the museum's Imagination Gallery.

Installation of the Autry Museum case
"The Cowboy Is a Patriot: Gene Autry in World War II."

Gene Autry's service during World War II, both in uniform in the Army Air Corps and as a performer for the USO, are presented in this case.

The script and the transcription disc from the Gene Autry Melody Ranch radio show broadcast of July 26, 1942 are on display. Gene was sworn in to the Army Air Corp live on this radio show.

"The Cowboy is A Patriot: Gene Autry in World War II" case will be on view through the Summer of 2018 at the Autry Museum of the American West.

Gene Autry being sworn in to the Army Air Corp on July 26, 1942 live on his Melody Ranch radio show.

When Gene was released from his military duties in the Army Air Corps he toured with a USO troupe in the South Pacific.

More from the Autry Museum 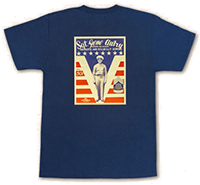 If you've seen the Autry Museum's special exhibit case "The Cowboy Is a Patriot: Gene Autry in World War II" then you most certainly saw the colorful 1943 songbook Sgt. Gene Autry Presents His Favorite Patriotic and Hillbilly Songs. It is such a wonderful image that we've made a new Gene Autry T-Shirt with the songbook on the back of the navy blue shirt and the Autry Museum's name on the front. Sold exclusively at the Autry Museum Store for $28 (plus tax of course). Get yours today! Read more here. 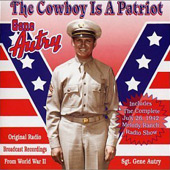 The Cowboy Is A Patriot Double CD
Posted December 1, 2017

The Cowboy Is A Patriot is a two-disc set. Disc one features 24 classic Patriotic tunes as well as wartime and Wrigley's announcements from the 1940s. Disc two is a special bonus disc of the complete July 26, 1942, Gene Autry's Melody Ranch Radio Show. The booklet features detailed liner notes by James E. Wise, Jr., author of the book Stars In Khaki: Movie Actors in the Army and Air Services, and rare World War II era photos from Gene Autry's personal collection. Listening to this collection truly creates a window to the feelings and emotions of World War II America. Read more here.